﻿﻿
The Bamiyan valley marks the most westerly point of Buddhist expansion and was a crucial hub of trade for much of the second millennium CE. It was a place where East met West and its archaeology reveals an amalgam of Greek, Turkish, Persian, Chinese and Indian influence. Since Bamiyan is situated on the fabled and ancient Silk Route, much of the trade between China and the Middle East / Western World passed directly through it via endless and timeless caravan processions.

Because of the cliff of the Buddhas; the ruins of the Monk's caves;  Shar-i-Gholghola ('City of Screams / Sighs', the ruins of an ancient city destroyed by Genghis Khan during the siege of Bamiyan); its spectacular local scenery; relative peace and stability;  its close proximity to Afghanistan’s first declared national park – Band-e Amir, Bamiyan is one of the most visited places in all of Afghanistan. The area also boasts huge eco and adventure tourism potential.

The Shar-i-Zohak mound or Red City, located 16  kilometres south of the valley, is the site of an antiquated citadel that guarded the then and more recent approaches to Bamiyan. Atop the ruins of the ancient acropolis are gun emplacements and rudimentary bunkers, the legacy of a decade of country-wide Russian occupation, demonstrating clearly that Afghanistan and its indomitable fighters have exclusive bragging rights as the graveyard of successive empires.

Bamiyan is the cultural centre of the Hazara ethnic group of Afghanistan and is cradled between the parallel mountain ranges of the Hindu Kush and the Koh-i-Baba. The main crops grown, on the well-watered and fertile valley floor in spring, are wheat, barley, mushung and baquli. When crops are damaged by unusually harsh weather, residents herd their livestock down to Ghazni and Maidan Provinces to exchange for food. Mountains cover ninety percent of the province, and the cold, long winter, lasting for six months, ushers in bitterly cold conditions with temperatures ranging from three to twenty degrees Celsius below zero.

On the cliff face of the sandstone mountain nearby, three colossal statues were carved 4,000 feet apart. One of them was 175 feet (53 m) high standing statue of Buddha, the world's tallest. The ancient statue was carved during the Kushan period in the fifth century. The statues were destroyed by the Taliban in March 2001, on the grounds that they were an affront to Islam. The destruction of the Bamiyan Buddhas became a symbol of oppression and a rallying point for the freedom of religious expression. Despite the fact that most Afghans are now Muslim, they too have embraced their past and many were appalled by the destruction. 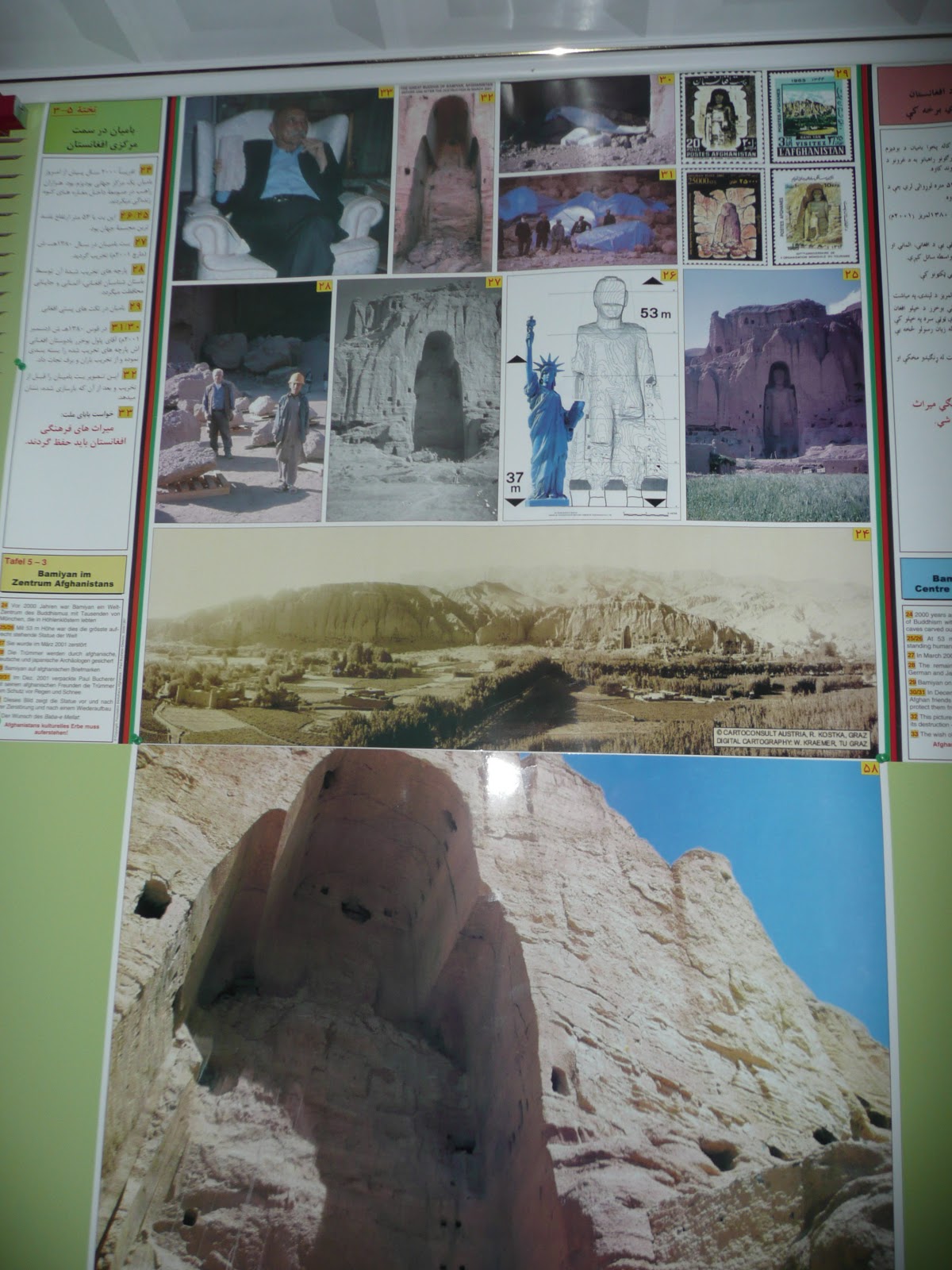 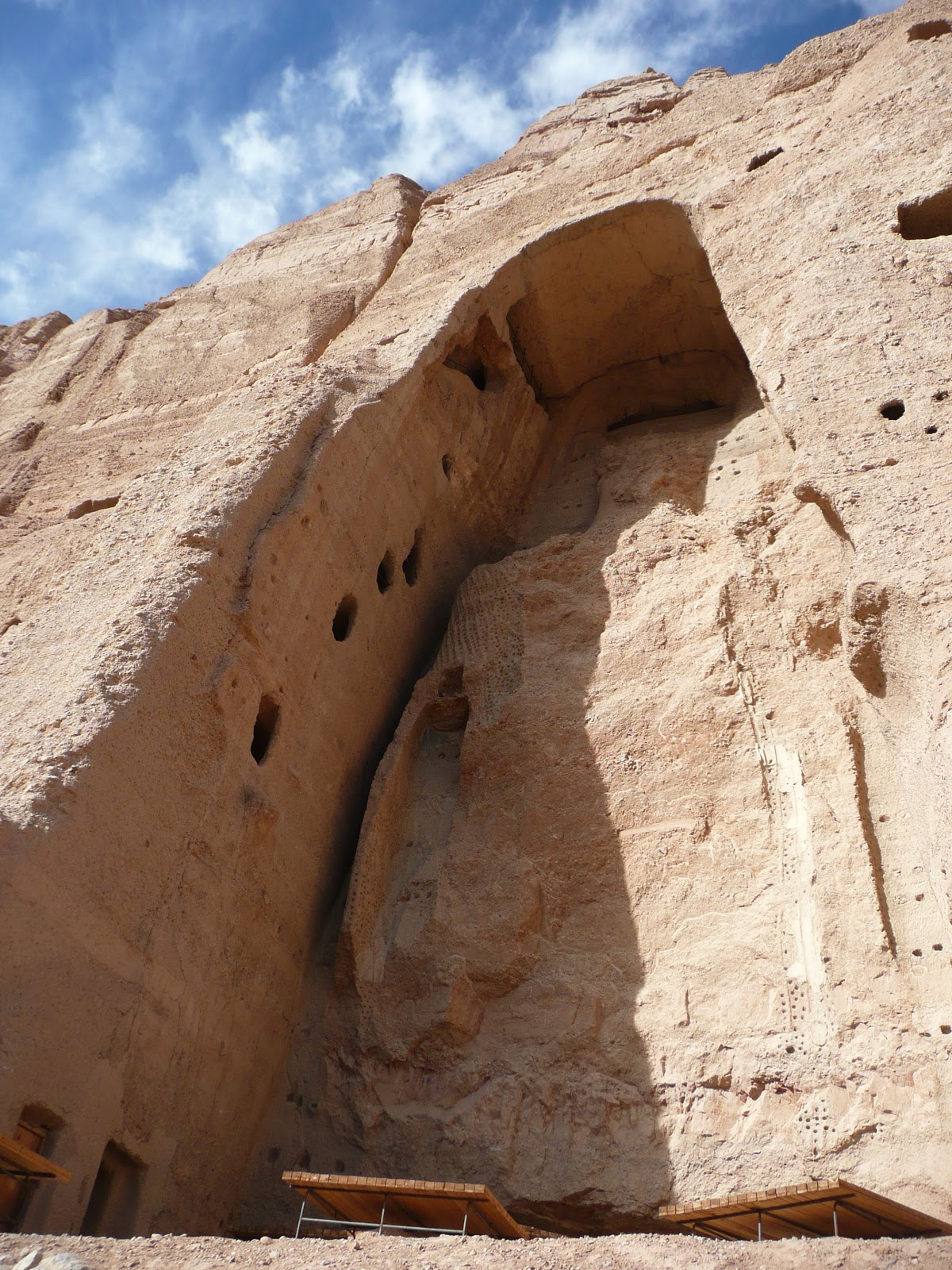 The statues were destroyed by dynamite over several weeks, starting on 2 March 2001, carried out in stages. Initially, the statues were fired at for several days using anti-aircraft guns and artillery. This caused severe damage but did not obliterate them. During the destruction, Taliban Information Minister Qudratullah Jamal lamented that, "this work of destruction is not as simple as people might think. You can't knock down the statues by shelling as both are carved into a cliff; they are firmly attached to the mountain." Later, the Taliban placed anti-tank mines at the bottom of the niches, so that when fragments of rock broke off from artillery fire, the statues would receive additional destruction from fragments or sharpnel that set off the mines. In the end, the Taliban lowered men down the cliff face and placed explosives into holes in the Buddhas. After one of the explosions failed to completely obliterate the face of one of the Buddhas, a rocket was launched that left a hole in the remains of the stone head.

The then director general of U.N. Educational, Scientific and Cultural Organization (UNESCO) Koichiro Matsurra called the destruction a "...crime against culture. It is abominable to witness the cold and calculated destruction of cultural properties which were the heritage of the Afghan people, and, indeed, of the whole of humanity.” Limited efforts have been made to rebuild them, with negligible success. The Buddhist remnants at Bamiyan were included on the 2008 World Monuments Watch List of the 100 Most Endangered Sites by the World Monuments Fund.

It is estimated that at any one time, two thousand monks meditated in caves among the Bamiyan sandstone cliffs. The caves were also a big tourist attraction before the long series of wars in Afghanistan. The world's earliest oil paintings have been discovered in caves behind the partially destroyed colossal statues. Scientists from the European Synchrotron Radiation Facility have confirmed that the oil paintings, probably of either walnut or poppy seed oil oil, are present in 12 of the 50 caves dating from the 5th to 9th century. Possibly, the paintings may be the work of artists who travelled on the Silk Road.

The caves at the base of these statues were used by Taliban for storing weapons. After the Taliban were driven from the region, civilians made their homes in the caves. Recently, Afghan refugees escaped the persecution of the Taliban regime by hiding in caves in the Bamiyan valley. These refugees discovered a fantastic collection of Buddhist statues as well as jars holding more than ten thousand fragments of ancient Buddhist manuscripts, a large part of which is now in the Schoyen Collection. This has created a sensation among scholars, and the find has been compared with the discovery of the Dead Sea Scrolls.

Band-e Amir National Park, declared in 2009 as the first such park in Afghanistan,   is a series of six deep blue lakes separated by natural dams made of travertine, a mineral deposit. The name literally means "Commander's Dam" which is a reference to Imam Ali, the first imam of the Shia Muslims and the fourth Caliph of the Sunni Muslims. The individual lakes have exotic and imaginative names including: Lake of the Slaves; Lake of Caliph Ali's Slave; Lake of Grandiose reported to be the biggest and the deepest of the six, with an average depth of approximately 150 meters; Lake of Cheese; Lake of Wild Mint; and Lake of the Sword of Ali.


﻿
Band-e Amir is situated at approximately 75 km to the north-west of the ancient city of Bamiyan, close to the town of Yakawlang. Together with Bamiyan Valley, they are at the heart of Afghanistan's tourism, attracting thousands of tourists every year and from every corner of the world. The lakes are primarily a late spring and summertime tourism destination, as the high elevation central Hazarajat region of Afghanistan is extremely cold in winter, with temperatures reaching as low as -20C.

The lakes were created, over eons, by carbon dioxide rich water oozing out of faults and fractures to deposit calcium carbonate precipitate in the form of travertine walls that today store the water of these lakes. Band-e Amir, elevated at approximately 3000 m in the Hindu Kush Mountains, is one of the few rare natural lakes in the world which are created by travertine systems. As a consequence, Band-e Amir was nominated for recognition as a  UNESCO World Heritage site in 2004. The site is described by some as Afghanistan's Grand Canyon.

Problems facing prospective visitors to the lake system include harsh terrain, rocky plateau,  lack of basic facilities and mined unpaved roads. The surrounding roads were heavily mined by the local militias and the Taliban during their respective reigns. Only a thin track is clear from mines and is in use by traffic.

Due to lack of attention and the absence of any management authority, increasing visitor numbers pose a threat to the ecological balance of the lakes which include unregulated grazing and uprooting of shrubs which can result in serious soil erosion and even landslides. Unorthodox fishing techniques including the use of electricity from mobile generators and explosives such as grenades have damaged the aquatic ecosystem. According to the Wildlife Conservation Society, which has been instrumental in bringing a semblance of natural resource management and community based tourism to the area, much of the park's wildlife has been lost. Due to lack of funding for waste management, human waste and trash has led to increased pollution. In 2008 the Afghan government banned the use of boats with gasoline engines on the lakes.

Posted by Barry Greville-Eyres at 10:48 PM