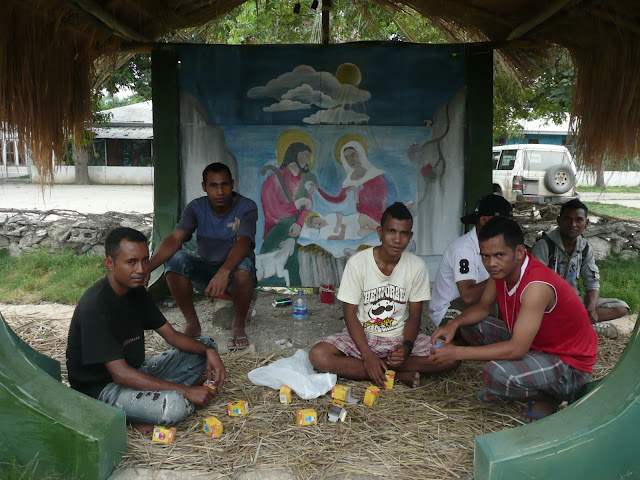 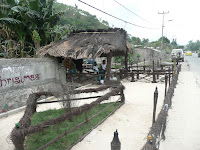 A few of the countless nativity scenes on display throughout Dili in the lead up to the 2011 Festive Season. Little effort or expense is spared in an attempt to garner the coveted title of the Best Nativity Scene in Timor-Leste. The Festive Season is hugely significant in the Timorese Christian calender moreso in that it also coincides with the onset of the life-giving, rainy season ushering in months of revival and renewal. This is in stark contrast to the 'Big Dry' where life for man and beast can be quite tenuous.
These is no doubt that the Timorese count their many blessings in the more conventional, Christian-Catholic way but equally in a far more mysterious and fascinating way through their traditional uma Lulik.  In people and nature relationships, Lulik dictates how people should treat nature (especially land) to support their life. According to Josh Trindade, Lulik demands that nature (such as land, water, trees/forest, rocks/stone) must be respected. This is the very reason why Timorese always have ceremonies and/or rituals after harvests and before the planting season. This is to show gratitude and to value the fertility of the land that provides bountiful food crops to the nation. The Sau batar ceremony, before the corn harvest, is an example and is one of the most important rituals for the Timorese.
The main objective of Lulik as a philosophy is to ensure peace and tranquility in society as a whole. This can be achieved through the proper balance between different and opposing elements. As an example, Timorese believe that peace and prosperity can be achieved through a proper balance between the real world and the cosmic world. In this case, people in the real world should follow the rules and regulations set by their ancestors. These rules and regulations can be a harmonious relationship between individuals within family, clan and wider society.

Whereas time was suspended then (in the dry season) it's now in overdrive - rain, soil, biological processes and invading weed/plant species wait for no mankind. It's literally plant for your LIFE!  The the majority of Timorese eke out a subsistence reality, living off the land and crop failures place communities and individual families at the real risk of malnutrition and even starvation. It's uncanny how well the Timorese are synchronised with the natural processes and ebb and flow of life. They ghost, in grey sheets of rain as misty mirages, across their earthy fields performing an age-old, sensuous ritual of renewal – clearing, plowing, hoeing, sowing and tending and at its absolute climax, harvesting. Communities band together, informally, planting up each others' lands in mutual agricultural programs.

As a land of absolute extremes and dramatic topography, saturated mountain catchment areas deliver broad and localised torrential downpours to valley, floodplain and coast. Destructive flashfloods, in a give-and-take rapport, deposit huge amounts of gravel, silt, topsoil and debris in broad swathes across countless coastal floodplains and then haemorrhage into the sea where they stain pristine coral reefs - blanketing and choking them in a perpetual  tit for tat cycle. Conversely, the abrasive torrents also scour and swash away all before them crafting new landscapes and forms that leave one in awe of nature's raw power.

Shades of life – every imaginable hue of green and regrowth – tamarind, mountain gum, ever evergreen coastal mangroves, leguminous trees and shrubs explode into life at the onset of the rains. Animal  droppings in abundance – plump, glossy, hydrated, nutrient and fibre-rich completing the cycle of life. Offspring of all manner, with their own exuberance borne out of a season of bounty feed and cavort as if there is no tomorrow – all part of a grand design though as months of drought and deprivation are not far away. Domestic pigs foraging within the inter-tidal zone particularly at low tide. This is most certainly a country and bio-physical environment not easily tamed and there is a real sense that the Timorese would not want it any other way. Evidence of this is plain to see - scarred landscapes, a weariness written over most Timorese and many, many cemeteries.

As Timorese enter into an important 2012, many will be hoping for a few additional blessings - perhaps for orderly, fair, free and democratic presidential and parliamentary elections culminating in a new brand of leadership that will fasttrack vital  development within Timor-Leste.

Posted by Barry Greville-Eyres at 5:02 PM